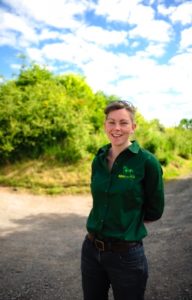 Christina (Tina) Fitzgibbon has ridden competitively in dressage, showing, working hunter and endurance since she was 6 years old, but eventing and show jumping have always been the apple of her eye.Â Some of her riding highlights include:

After secondary school Tina took her pursuit of knowledge in â€˜all things horseâ€™ in an academic direction and obtained a BSc (Hons) in Equine Science & Management, specializing in Physiology and Therapy from Mysercough College in Lancaster. During that time she had:

Two years later Tina went on to obtain an MSc in Equine Science from the University of Edinburgh. Her MSc thesis â€˜Anatomical studies of maxillary cheek teeth infundibula in clinically normal horsesâ€™ was published in the Equine Veterinary Journal 2009 41 (1).

She then obtained her Post Graduate Certificate in Education while teaching as an Equine Lecturer and Course Manager for FE and HE at Moulton College in Northampton. During that time she was introduced to the ETB Pegasus equine gait analysis product and was later asked to be the Sales Manager for the product now known as Gait Smart. After one short year Tina and her partner then moved to Devon due to personal circumstances. While in Devon Tina met Penny Bond of Hush Farms and pursued being an Equine Specialist within the Equine Assisted Growth & Learning Association (EAGALA) and obtained her Certificate in Assessing Vocational Achievement (CAVA) which allows her to be an Equine Apprentice Assessor. It was at this time that Tina then started her business, Equichanics. Her mission is to help people develop a logical and fair communication system with their horse that is self-progressing, with the aim of making all involved happier and improving welfare.Â

One of the first horses Tina took on livery while in Devon then changed things dramatically for her. After nearly a year of battling with veterinary investigations the horse was diagnosed with Wobblers and put to sleep. Looking for answers about how the problem could have been spotted earlier, Tina came across a research group on Facebook, which lead her to the name Sharon May-Davis.Â Â

In 2015 Tina then met Sharon May-Davis at a Whole Horse Dissection organised by Lindsey Holder and since then Tinaâ€™s business has aligned itself to marry her pre-existing industry and academic knowledge, and passion for teaching to the hands-on, experiential, research driven learning that is provided by Sharon and her team at their workshops in the hope that she can give the horse more of a voice with each day that passes.Â